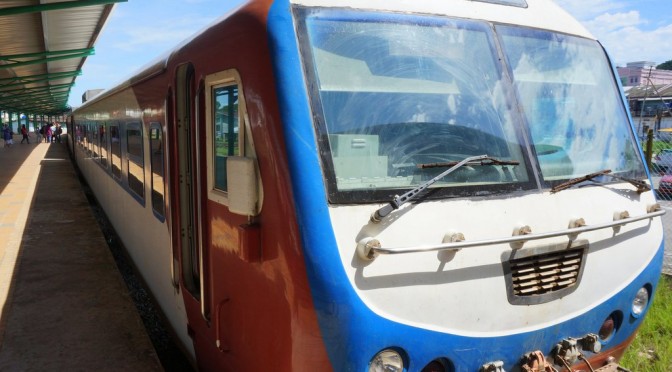 Ever since moving here to this Land Below The Wind, Sabah, I have never took a step into the Sabah State Railway main station at Tanjung Aru, Kota Kinabalu.

Not that i’m not aware of such railway system when its main station is so visible in front of the main highway to the Kota Kinabalu International Airport but I just couldn’t bother to care about it because most of the major townships connected by this railway can be easily accessible by the trunk road and whenever there’s need to visit these townships, I would just drive there. On top of that, I had this mindset that the railway system simply existed just to preserve this rich history of Sabah railway as well as its contribution to the state’s tourism industry. I would later found out that there’s more reasons to its existence.

For the sake of your information, here’s a very brief history about Sabah State Railway (SSR). The Sabah State Railway has being in existence since year 1896 when Sabah was still known as North Borneo, under the administration of British North Borneo Chartered Company (BNBCC). The initial railroad was constructed from the township of Beaufort to Weston and over the years, it progressively extended to Jesselton (Now known as Kota Kinabalu) when it becomes the main port of export for local products namely the rubber and tobacco. Nowadays, the railway shift local passengers and tourists from town to town.

A friend of mine asked me if I would like to join them for a short day trip to Beaufort township via the railway the other day. The last time I took a railway was when I was just a young boy, following a family trip to Singapore from Kuala Lumpur in West Malaysia. Without hesitation, I agreed to joined them since I have not experienced Sabah railway before. The next day, off we went.

We arrived at the Tangjung Aru Main Railway Station at approximately 7.30a.m. after our breakfast. There were already few people lining up at the ticket counter. We bought a one way ticket to a small town called Beaufort about 100 kilometers south of the city of Kota Kinabalu. It costs RM4.80 per person.

As I mentioned earlier, I never thought that Sabah State Railway still play such an important role in the transportation system in Sabah. Just look at the number of people boarding the train. Soon, we realized that the whole train was full and we were barely to find any seats for ourselves.

Once the train was fully loaded, it departs for Beaufort at exactly 7.45a.m. as scheduled. Train was travelling slow initially but picked up speed eventually, reaching approximately 80 kilometers per hour, which was not to fast, but not too slow either. I was expecting it to travel like 30-40 kilometers. I underestimated our Sabah State Railway service, shame on me.

As can be seen from the inside of our coach (pictured above), it’s quite clean and tidy, comparable to those maintained, KTM, another more established railway company in West Malaysia.

The journey takes us to lovely villages, small townships, rivers, undisturbed mangroves swamps and beautiful coasts. I managed to snap some lovely pictures throughout the train journey below:

Two hours was all it takes to reach Beaufort town and we reached at approximately 10.00a.m.. Overall, the journey was a pleasant one. On some part of the railroad, the coach can sway quite violently probably due to unaligned railroad but for most of the journey, it was smooth and relaxing, not forgetting to mention, the aircond is super cool.

Now, if you’re local Sabahan, please, have a go and experience this train ride at least once if you have not tried before and don’t be an ignorant just like me. The cost is minimal but the experience is truly valuable particularly for those who never experienced a train ride before.

For the time being, the railway serve 15 stations as per map below: 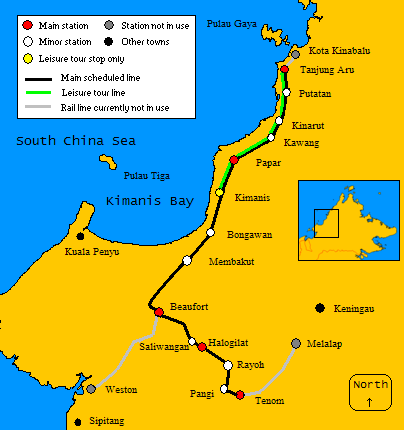 For pricing of the railway service and schedule:

Oh, not forget to mention it here, if you would like to experience the classic train that is still using steam as its power source, Sutera Harbour Resort is operating a tour called North Borneo Railway or you may contact 1TourAdventure for such tour arrangement. I have personally not experienced riding a steam train but will make an effort to try and share with you guys here.

Map below on location of Tanjung Aru Main Railway Station:

Please do not hesitate to leave your comment below if you require further information and if you like this, say thanks by sharing this page!