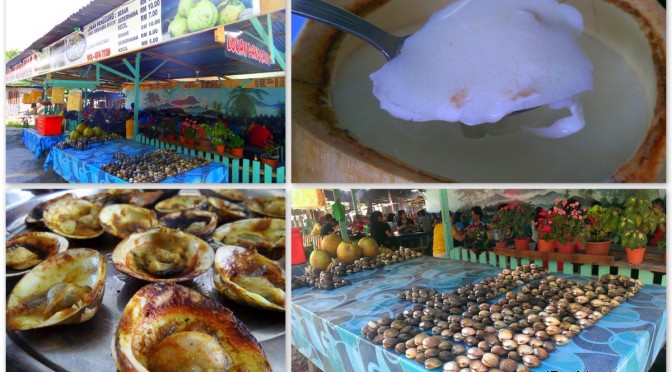 After reading the title above, don’t expect any fancy restaurant that i’m going to introduce to you this time. The place that I will be talking about serves pretty nice babeque clam and coconut pudding though, and is a recommended stop-by if you’re visiting Kota Kinabalu.

Few years back, whenever I was driving through a particular section of Jalan Sulaiman (Location map shown below), there were some 15 plus makeshift stalls set up along both side of the single carriageway that always caught my attention because they were always visited by many people. I never get the chance to find out what was so attracting to these people until one day, on the way to my Kawa Kawa River Cruise tour, I got the chance to understand the popularity of this place.

From my understanding, most of these stalls serve the three most popular delicacies namely the Lokan Panggang (Babeque Clam), Puding Kelapa (Coconut Pudding) and Kelapa Bakar (Roasted Coconut) and a lot of tour guides will not miss bringing tourists to this place to try up the above three popular delicacies.

First, let’s talk about the babeque clam. The clams used for the serving are the type mostly found in the mud of mangroves. They are served in 3 sizes: Big (RM12 per serving), Medium (RM10 per serving) & Small (RM7 per serving). Make no mistake like I did as I thought the three sizes were referring to quantity but that’s not the case. They actually means the size of the clams. All sizes were served in 20 pieces. 20 pieces may sounds a lot, but trust me, it actually not that many when consumed.

The clams are grilled by placing them on a piece of zinc, which is placed over wood burning fire. So how do they taste? This stall that I visited served their babeque clams with satay sauce flavor. Satay sauce is typical sauce used to serve with satay in Malaysia and it’s made from roasted peanuts and tastes, sweet and salty. The clams themselves are babequed to perfection and the meats are tender, soaked with the strong flavor of the satay sauce and it felt so satisfying once you start to chew on them when the tasty satay sauce burst into your mouth. Okay, enough about that. Just writing this is making me salivate already.

The next served delicacy will be the coconut pudding. The name explained it all. It’s basically pudding served in a coconut and chilled so it’s most suitable to consume when you’re under the extreme heat of sun. The coconut pudding is sweet and very rich with the taste of coconut milk.

The last one of the delicacy is roasted coconut. I haven’t got the chance to try this from my last visit but from how I see, it’s basically coconuts roasted over wood burning fire. I cannot comment much as have not really tried it myself. Will keep you posted once I get to try this out on my next visit.

In regards to business hours, each stall differs from each other but generally, they starts operating from 10am to 5pm.

Map from Kota Kinabalu City Centre to here as per below:

If you like this page, say thanks by sharing this page!