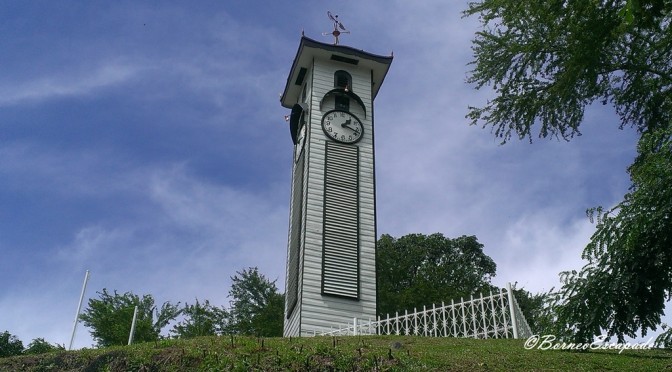 Atkinson Clock Tower is the only oldest standing structure in Kota Kinabalu that has survived to this day.

Built in 1903, it was built in the memory of Francis George Atkinson who was the first district officer of Jesselton (which Kota Kinabalu was known) during the British North Borneo Chartered Company administration.

Measuring about 15.24 meters in height, the tower itself was built wholly from wood and without usage of any nails. The tower is situated on a bluff overlooking the the city of Kota Kinabalu but back in it’s days, it was used as a landmark for ships calling port at the wharf. This may seem ridiculous now, given it’s location of quite some distance away from the sea shore and the fact that it’s now being blocked by tall commercial buildings. The reason of this is because most of the buildings in Kota Kinablau are sitting on reclaimed land.

One only need to look at the old photos of Jesselton in the 1910’s to realize how significance the tower used to be back then.

The Atkinson Tower Clock is opened 24 hours for visit.

If you like this page, please say thanks by sharing this page!